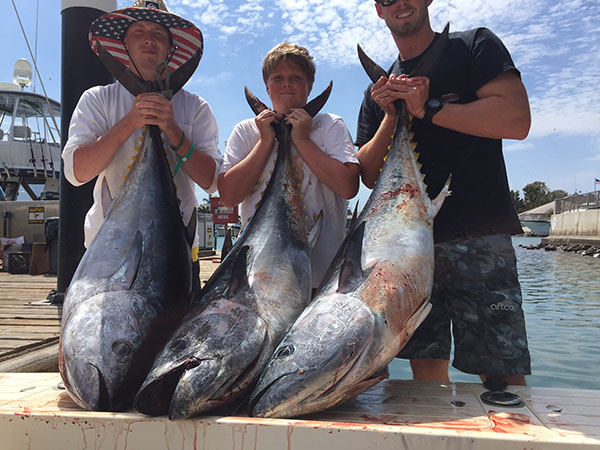 July and August have been all about Bluefin and Yellowfin Tuna. We are now into September and they are still on the chew! 2016 has been a year unlike any other we’ve seen in recent history, bringing historic catches to Southern California. The headline news has been big Bluefin Tuna up to nearly 300 pounds! We’ve been targeting these fish a few different ways. Early on it started out on foamers. Foamers happen when tuna push a school of bait fish like Anchovy to the surface and go into a feeding frenzy. It can literally look like a wave is breaking in the middled of the ocean as the Bluefin blow the baitfish completely out of the water by the thousands.  When Bluefin are in this kind of feeding frenzy the most effective way to hook them is with Flat Falls, Colt Snipers, Poppers and Surface Irons. It can be tough to get them to eat bait when they’re “keyed in” on micro bait and feeding on the surface like this, so we stay stocked up with all the latest jigs.

Some of the largest Bluefin Tuna have been coming while kite fishing. The “Yummy Flyer” has been the ticket while fishing the kite. The “Yummy” is a perfect replica of a flying fish, when it’s used with a kite, it fly’s in and out of the water just as a flying fish would in nature.  When Tuna hit the Yummy Flyer it’s amazing! Sometimes you will actually see a 200+ pound Tuna jump completely out of the water at your “Yummy Flyer” and inhale it! It’s a site you will never forget!

At the beginning of September the Tuna starting eating live bait, both Sardine and Mackerel.  When fishing Tuna with live bait we use a circle hook that matches your baits size and a fluorocarbon leader to avoid the Tunas sharp teeth.

Although Tuna has been the primary focus, Dorado (Mahi-Mahi) have been around too. They have been a great bonus and have been solid in size! We’ve been finding them under floating kelps while on the hunt for Tuna. They’ve been eating the fly line Mackerel the best. The livelier the bait the better!

Yellowtail fishing continues to be hot! Solid home guard Yellowtail have been roaming on both our nearshore and offshore fishing trips. These fish have been between 20 and 40 pounds and can fight! They love strong currents so they stay extremely strong and will take drag at will. My favorite method to catch these fish has been slow trolling live Sardine and Mackerel. More often than not, if you’re watching your bait, you will see the Yellowtail come up and blow it out of the water when it strikes! Then you better hold on tight, as Yellowtail are some of the toughest fighting fish pound for pound! The Yellowtail fishing as of late has been almost entirely on live bait, with a few guys getting them on the surface iron.

We specialize in private fishing charters for 1 to 6 passengers. We are a small group of local fishermen who grew up fishing out of Dana Point Harbor. We will put you on fish year round!